You can use the more than 20 interpreters in zeppelin (for example: spark, hive, Cassandra, Elasticsearch, Kylin, HBase, etc.) to collect data, clean data, feature extraction, etc. in the data in Hadoop before completing the machine learning model training. The data preprocessing process.

By integrating submarine in zeppelin, we use zeppelin's data discovery, data analysis and data visualization and collaboration capabilities to visualize the results of algorithm development and parameter adjustment during machine learning model training.

As shown in the figure above, how the Submarine develops and models the machine learning algorithms through Zeppelin is explained from the system architecture.

After installing and deploying Hadoop 3.1+ and Zeppelin, submarine will create a fully separate Zeppelin Submarine interpreter Docker container for each user in YARN. This container contains the development and runtime environment for Tensorflow. Zeppelin Server connects to the Zeppelin Submarine interpreter Docker container in YARN. allows algorithmic engineers to perform algorithm development and data visualization in Tensorflow's stand-alone environment in Zeppelin Notebook.

You can not only complete the model training of the algorithm, but you can also use the more than twenty interpreters in Zeppelin. Complete the data preprocessing of the model, For example, you can perform data extraction, filtering, and feature extraction through the Spark interpreter in Zeppelin in the Algorithm Note.

In the future, you can also use Zeppelin's upcoming Workflow workflow orchestration service. You can complete Spark, Hive data processing and Tensorflow model training in one Note. It is organized into a workflow through visualization, etc., and the scheduling of jobs is performed in the production environment. 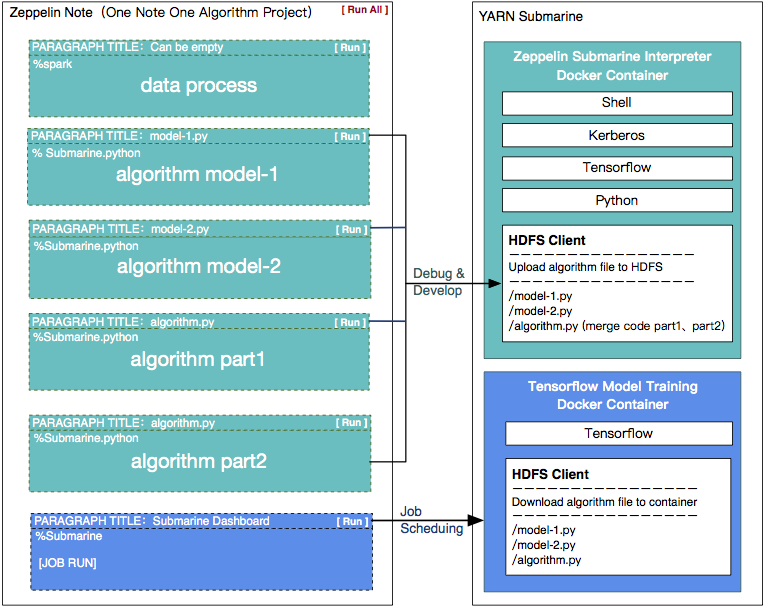 As shown in the figure above, from the internal implementation, how Submarine combines Zeppelin's machine learning algorithm development and model training.

You can add one or more paragraphs to Note. Write the algorithm module for Tensorflow in Python using the %submarine.python identifier.

After writing the Tensorflow algorithm by using %submarine.python, You can add a paragraph to Note. Enter the %submarine dashboard and execute it. Zeppelin will create a Submarine Dashboard.

With Submarine Dashboard you can do all the operational control of Submarine, for example:

The docker images file is stored in the zeppelin/scripts/docker/submarine directory.